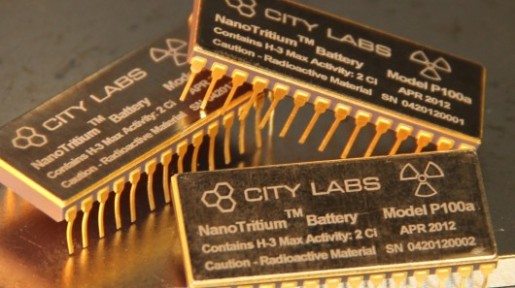 When installing micro-electronic devices in locations that are expensive or hard to reach, or just downright dangerous, you don’t want to have to keep returning to swap out a battery cell. City Labs has announced the commercial launch of its NanoTritium betavoltaic power source, a thumb-sized battery that draws on the energy released from its radioactive element to provide continuous nanoWatt power for over 20 years.

Contrary to the celluloid claims of Dr Octavius (in the movie Spiderman 2), there’s quite a bit more than 25 pounds (11 kg) of tritium (a radioactive isotope of hydrogen) in the world today. Although occurring naturally in the upper atmosphere, it’s also produced commercially in nuclear reactors and used in such self-luminescent products as aircraft dials, gauges, luminous paints, exit signs in buildings and wristwatches. It’s also considered a relatively benign betavoltaic, providing a continuous flow of low-powered electrons for a good many years.

According to the Environmental Protection Agency, tritium has a half-life of 12.3 years and the Model P100a NanoTritium betavoltaic power source from Toronto’s City Labs is claimed to be capable of providing juice to low-power micro-electronic and sensor applications for over 20 years. It’s described as robust and hermetically sealed, and the tritium is incorporated in solid form.

Independent testing undertaken by Lockheed Martin during an industry-wide survey also found the technology to be resistant to broad temperature extremes (-50° C to 150° C/-58° F to 302° F), as well as extreme vibration and altitude.

The company reports that it has just been granted a Product Regulatory General License to manufacture, sell, and distribute its NanoTritium battery, making its P100a the first betavoltaic power source to be made available to customers who don’t have a radiation license, haven’t obtained regulatory approval or undergone special training.

The company’s Denset Serralta confirmed that its betavoltaic power source is available now (with a 6 to 8 week lead time) and told us that “price ranges are in the US$1,000s, future price ranges will drop from that or will increase in power output.”

City Labs (which is backed by Alienware’s co-founder Alex Aguila, currently located within the NASA-sponsored Carrie Meek Business Center in Homestead, Florida and includes betavoltaic pioneer Larry Olsen as Director of Research) says that higher power batteries are currently under development, which could provide tens of microwatts over the long haul as well as short bursts of milliwatt power.