WikiSensor app turns an iPhone into a radiation detector

WikiSensor is a scientific platform (softwares) for environmental quality measurement to be used on multiple electronic devices such as cell-phones, tablets, cameras… 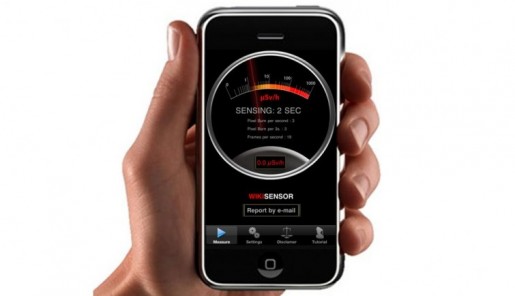 To convert your iPhone into a radiation detector all you need to do is install the WikiSense app and stick some opaque black tape – electrician’s tape should do the trick – over the iPhone’s front-facing camera. Since the CMOS sensors used in smartphone cameras like the iPhone’s don’t just pick up visible light but also high frequency waves from radioactive sources, such as gamma and X-rays, covering the lens means only those waves make it through to the sensor. Once activated, the application then counts the number of impacts the sensor receives and translates that into a value in microsieverts per hour.

The makers of the app admit it won’t give a precise reading, but rather an approximate one that should be validated by more professional tools if a reading above five microsieverts per hour is detected.

The team behind the app plans to develop a tool that uses data gathered from various users to generate a map showing radiation levels in different locations – hence the wiki prefix. With the ultimate vision of developing a platform that uses a network of devices – particularly smartphones – as a sensor network to measure various aspects of environmental quality, the company also has plans to develop apps to measure Wi-Fi waves, relay antenna waves, magnetic fields, earthquakes, greenhouse gases, UVA/UVB light, oxygen and temperature.

The WikiSensor app has only been calibrated for use with the iPhone 4 and is available now for US$0.99 from the iTunes App Store.

RUMlogNG version 5.7.1 for MAC
Tom Lindner (DL2RUM) has released v5.7.1 of RUMlogNG for direct download or via the App Store. RUMlogNG is a HAM radio logging, QSL handling and printing tool, especially made for the short wave DXer,...