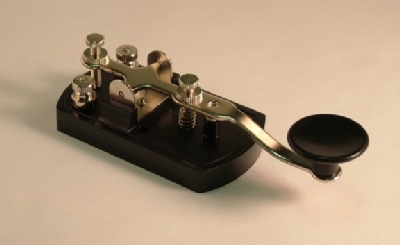 Ham Morse allows you to practice morse code on your iPhone, iPad or iPod Touch. It is designed particularly for Ham radio operators and others who wish to achieve or maintain a high level of proficiency in this classic mode of communication.

You can practice Morse code created from the following:

Have any thoughts or suggestions? Please visit the Ham Morse forum.

The code is sent using the Farnsworth timing whereby the morse characters are sent at 15 words per minute (WPM) and then extra spacing is added to slow the overall WPM to speeds slower than 15 WPM. The farnsworth speed can be adjusted if you wish to use a speed other than 15WPM. The maximum speed that the morse can be sent at is 50 words per minute. The morse audio waveforms have a 5ms rise time to reduce key clicks and yet provide crisp code to copy.

The code can be paused just in case you are interrupted or want to take a break, an incoming call on an iPhone pauses the code automatically. Ham Morse is iOS5 multitasking compatible so you can put the app in the background and come back to it at a later point and everything is ready to go.

To help you learn the morse code itself HamMorse allows you to practice a variety of sets of characters from individual random letters all the way to the current news stories from around the world. Here are some more details of the available modes:

Koch – This setting uses the Koch character progression. It starts with just two letters and then you can add a new letter when you have mastered the previous character set. This is one of the most popular methods of learning the morse character set.

Numbers – Practice the numbers, 0-9. Which numbers you practice can be controlled on the settings page.

Callsigns – allows you to practice receiving random amateur radio callsigns, a mixture of letters and numbers (eg AA9PW, G1SNT, G5RV) that often prove troublesome when copying code on the air. HamMorse creates a wide variety of international callsigns using the standard ITU prefixes to provide useful practice where ever in the world you may be.

Top 100 and 500 most common words – this is a great way to start to recognize whole words the key to really improving your speed.

News feeds – these provide the opportunity to copy real sentences and keep up with the news at the same time. Note that the News feeds will only work with an active network connection.

Ham QSOs – listen to examples of typical on-air exchanges between ham radio operators – practice coping the callsigns, RST reports, location, rig, antenna and many other pieces of a typical QSO.

Added the ability to vary the text block length when copying random blocks of characters (e.g. letters, numbers, etc). This varies the length of the blocks of characters in a more natural way so they are not always 5 characters long
iPhone 5 and Retina support to make use of the larger screen size in the iPhone5 and later models.

Koch letter progression – This is one of the most popular ways to learn the morse character set. The Koch progression allows you to start by mastering just one letter, then add in other letters in an optimal order designed to make it easier for you to master the whole character set over time.

Text Delay – You can set a time delay between when the morse code is played and when the character appears on the screen.

Filter out unfamiliar charactersfrom News feeds, QSO, etc. – Many people had requested the option to be able to filter out characters they had not yet learned from content such as News feeds and QSOs which can contain all the letters, numbers, punctuation. This is now possible in two ways.

Personalization – You can enter your first name and callsign and these will then be used when generating sample QSOs so that it will sound like the station is calling you.

Continuous Code – You can set Ham Morse to loop so it will keep creating new sets of code until you tell it to stop – great for longer practice sessions.

21 News feeds included from all around the world, please let me know if there are other News channels you would like available.

Ability to increase the text font size – the size of the text being sent can be changed on the settings page so you can enlarge the text to a size that best suits your needs.
Accessibility support – The app has support for Apple’s accessibility tool, Voice Over. When Voice Over is activated each button and field has an audible description available describing the button or slider and its use.

(1.450) Bug fix for iOS 8 scrolling, european letters, iPhone5 screens support, random text blocks
(1.430) Text delay and text filter added, ‘no audio’ bug for some iOS5 upgrades fixed, ESPN News feed added.
(1.4) New settings pages to allow greater control over the configuration of the app.
(1.32) Fixed bug that prevented installation of v1.3 over an old v1.1
(1.3) The glitch in the audio present in version 1.1 that caused the audio quality to degrade over time has been fixed.
(1.3) The timing between the morse audio and the appearance of the appropriate character was slightly off in the previous version, this has been fixed.