You probably know the following “problems”: During an SSB contest or with only moderate activity on the radio bands you want to save your voice calling CQ so a voice keyer (“CQ parrot”) is needed. For morse code you use an electronic CW keyer for automated CQ calls anyway. And if you are active especially on the VHF/UHF bands a sequencer is an essential station accessory to switch pre-amps, PAs and transceivers in a safe and timely way. 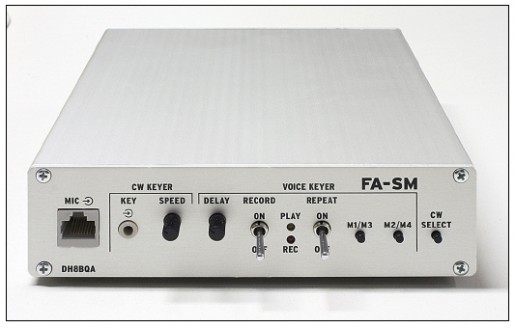 For all that there are several stand-alone home-brew designs on the internet (and even on my site, hi) as well as commercially available equipment for doing the job(s). But if you want to have all that in a small tiny box including everything and without the need to wire everything against everything with all the potential problems then it gets difficult. Needed efforts to realize such a solution are immense and doing it might well be buggy (see the pictures down on the sequencer page, we used it that way ourselves and probably know what we’re talking about ;-)). Even trying to wire commercially available equipment is tricky to say the least (besides commercial solutions usually being much over-prized). But that dilemma can be solved.

In issue 3/2010 of the FUNKAMATEUR magazine we described the latest version of our so called “contest keyer” that we developed and improved in a course of several years. It unites all above mentioned functionalities into one single enclosure without the need to wire anything internally. It’s a compact unit measuring just 165 x 165 mm so essentially the same dimensions as today’s available Japanese mobile and portable radios.

As such a nice accessory is not only useful during contests but solves a lot of problems of day-by-day operations of an amateur radio station, too, together with FUNKAMATEUR (FA) we decided to rename it to “FA station manager” (FA-SM) as it is available as a kit from them, too. It includes the following features:

A voice keyer with up to 60 seconds memory in total. 4 memories are available that can have different not predefined length’ as long as the total duration does not exceed 60 seconds. All stored voice messages can be played once or being repeated automatically. Pause time between repeats is adjustable between 0 and 30 seconds from a pot on the front panel. Recording is done through the attached transceiver microphone.

A CW keyer using the famous N?XAS design, aka “Picokeyer“. It includes 4 memories with max. 60 letters each, Iambic modes A and B, bug mode, contest mode (auto numbering), side tone, paddle change, beacon mode, etc. Keyer speed can easily be adjusted through a pot on the front panel.

A 4 channel sequencer making sure that attached pre-amps, power amplifiers, transceivers, etc. are timely switched on and off in a safe way. The sequencer takes the usual CW problem into account, too. Basically it’s the implementation of the DH8BQA sequencer with a few extras.

An additional feature is the built-in CW buffer. You know, even using a sequencer with CW support after pressing your CW key the sequencer stages simply need their time to switch possibly resulting in choppy CW signs and missing first letters of a morse transmission (depending on CW speed). How does that sounds like? Simply tune in one a the bigger HF or VHF contests and you’ll hear plenty of signals with exactly that problem. ;-)) The FA-SM takes care about it offering the possibility (configurable) to buffer the user’s CW signs and put it out to the transceiver just after all sequencer stages have switched without chopping off the signs. This is an FA-SM exclusive feature and a market first as we have never seen it in any other sequencing solution before.

Furthermore microphone PTT and digital modes PTT are routed seperately through the sequencer so you can simply use your digital mode equipment to do JT65, FSK441, PSK31, RTTY, etc. on the dedicated digi-mode port of modern transceivers but still protect your equipment and not needing to re-wire between microphone and soundcard interface.

Microphone connections (for the used mic itself as well as the connection from the station manager to the transceiver) can be freely and easily configured using a jumper matrix as shown on the right. Microphone connections to and from the FA-SM are RJ-45 based as found on many of today’s available radios. In this case a simple network cable will do the job connecting the FA-SM to the transceiver. Fitting microphones with 8 pol round connectors is easily done by using an adapter.

Last but not least there’s an FT-817 band-voltage detection built in. Using an ‘817 this enables you to configure the sequencer to switch the two available PA sequence stages individually according to the band in use. I.e. you can connect a 2 m and 70 cm PA to the FA-SM and the sequencer takes care only to switch on the 2 m PA when using 2 m and 70 cm only when transmitting there. So no need to change amplifier PTT lines with that solution to avoid “wrong band” amplifier keying.

An extensive assembly manual is available although in German only right now. You can buy the FA-SM as a complete kit with the ordering number BX-182 from FA’s readers service (if you have problems with their currently only German webshop do not hesitate to contact them by mail or telephone, they will be glad to assist you).
The kit includes the PCB with equipping print and solder mask, all parts to solder as well as a finished enclosure with all breakouts needed and front/back panel printing as can be seen on the picture above. Only through-hole components are used.