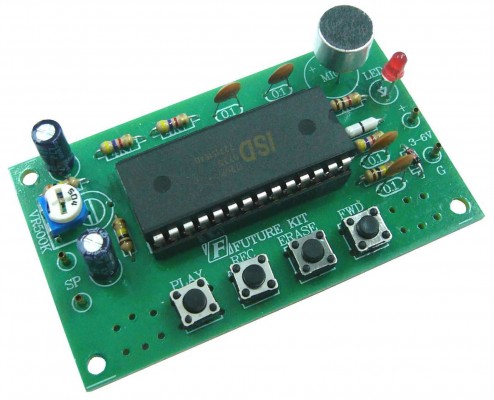 How to work:
The circuit working is mainly based on IC that was only built for a specific recording. The working can be divided into two parts, recording and replaying.

The working of the recording part will start when pressing switch SW1 REC and hold it. IC will start recording with LED1 is permanently lit due to the pressing of switch SW1. Microphone will take voice to IC1 for recording. During recording, if the switch is released or IC has fully recorded, the IC itself will immediately stop recording and LED1 will be also off. In case of IC has not fully recorded, the recording can be continued accordingly.  The working of the replaying part will start when pressing switch SW2 PLAY and IC will replay straight away. While replaying, LED1 is blinking and sending out the recorded voice through loudspeaker. In case of recording many versions e.g. two versions, IC will only play the first version. The second one will be played when pressing switch SW3 FWD. But if pressing SW3 again, IC will go back to play the first version. VR1 will control the recording time. Switch SW4 ERASE will be used for erasing of the recorded voice. Press one time for erasing of the existing recording version. But when permanantly pressing, all recorded version will be erased.

DIY: GBPPR Jamcat QRMaker
This is a simple add-on adapter for any Family Radio Service (FRS), amateur, or two-way radio transceiver with a microphone/Push-to-Talk (PTT) and external earphone/speaker interface.  It will turn the transceiver...

The Static Bleed Off
Static Bleeder for Any Antenna by Phil Salas – AD5X Many antennas don’t have a means of bleeding off static build-up. This includes the popular Hustler BTV-series of verticals, dipoles without...