Inrad’s HF Triplexer is a well engineered and thoroughly tested product designed to allow the multiplexing of a single 10-15-20 meter triband antenna amongst two or three single band radios. It may be used for events such as Field Day, WRTC as well as multi-single, multi-multi and even advanced single op operations. No longer are separate antennas necessary to run multiple radios. This results in station cost savings and significantly enhanced flexibility. 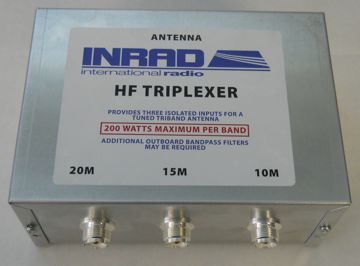 The Inrad HF Triplexer is comprised of three carefully designed two pole filters which, when combined, provides isolation between radio ports on 10, 15 and 20m, provided the antenna port is connected to an appropriate antenna. It is rated at a maximum of 200W per band input.
Note that the Inrad HF Triplexer is designed to work into a triband antenna which is tuned and simultaneously has low VSWR in each of the three bands (10, 15 and 20m). It is not meant for use with a non-resonant antenna which needs a tuner to operate. Examples of antennas that are not usable with the triplexer are Steppirs, G5RV, monoband dipoles, non-resonant verticals, etc. Tribanders such as the TH6DXX, KT34XA, A3S, C-3, CL 33, OB16-3, Skyhawk, Hexbeam and similar antennas should work well.

The top row above shows three xcvrs (A, B and C), each operating on a designated band. Xcvr A will receive a signal from Xcvr B which is 30 db down and from Xcvr C which is > 40 dB down, etc.

Suppose the power of each xcvr is 100 watts, or +50 dBm. The level at the three receivers would be as calculated below:

From this exercise we can determine that the worst case interfering signal level is +30 dBm. This is equivalent to 1 watt. Looking at the dBm ladder from W2VJN’s book “Managing Interstation Interference” shows that the maximum power that a typical receiver can take without damage is about +17dBm. So a minimum additional attenuation needed is +30 dBm – 17 dBm = 13 dB to prevent receiver damage.

Preventing receiver damage is not enough. The receiver will still overload or block unless the interfering signals are knocked down to a level of approximately 0 dBm (1 mW). This requires an additional 17 dB of attenuation. The total amount of additional attenuation required (on top of triplexer isolation) would then be 13 dB (to prevent damage) + 17 dB (to reduce receiver IMD/blocking) = 30dB. This may most easily be achieved by adding a bandpass filter (BPF) at each xcvr input port.

Typical VSWR performance
As with any inline filter device, the measured VSWR at the transceiver port may be altered slightly compared to direct connection to the antenna. This is to be expected and is not detrimental to the performance of the antenna.

Dunestar HF Triplexer PLUS Package
The 333 Triplexer is based on the work of K6KV as presented in the June 2010 QST Magazine article "HF Yagi Triplexer Especially for ARRL Field Day". Applications range from Field Day, to Emergencies,...