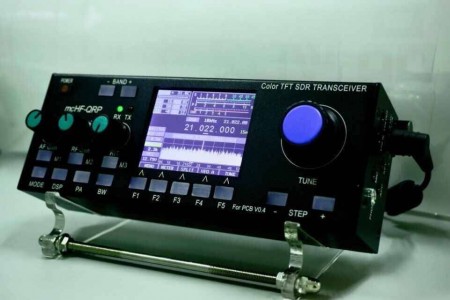 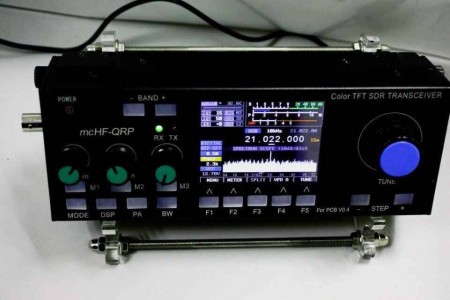 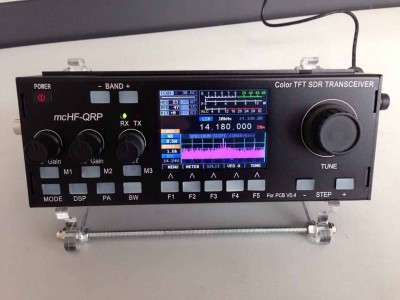 The choice of architecture is a direct conversion receiver and transmitter, with a small micro-controller to provide control and DSP functions. The analog blocks in this implementation were kept to the bare minimum. Shifting, as much as possible, functionality into the digital domain.

The receiver features: a SN74CBT3253C Tayloe detector as a direct conversion mixer – Local Oscillator frequency is four times higher than the receive frequency; a digitally switched band pass filter; voltage controlled attenuator and pre-amp situated in the RF signal path before the actual direct conversion process. The resulting IQ audio signals from the detector are sent to the WM8731 Codec for conversion to digital data, and then via I2S bus to the STM32F4 controller. The decoding of the different modes (SSB,AM and CW) is then performed by DSP routines inside the CPU. Finally, processed audio is sent back to the CODEC chip and outputted via the speaker or LINE OUT output.

The transmitter uses a reverse process of mixing four channels of audio data with the LO signal. The result is amplified by the linear amplifier and passed via digitally switched LPFs into the antenna output. As with the receiver, the CODEC processes audio from a microphone or LINE IN to convert it to digital data where it is sent on to the CPU for DSP processing. Here IQ data is generated and sent back to the CODEC. When in CW mode, software defined DDS is used to generate side-tone, controlled by an iambic keyer. Resulting IQ data is sent in the same way to the CODEC for conversion to analog signals and passed on to the tx mixer. 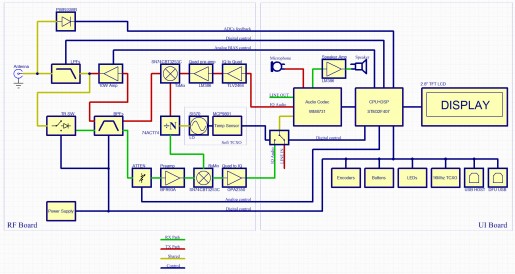 The architecture so far is no different than similar direct conversion QRP kits and projects. I have tried to further ‘digitise’ the design and add some ideas which might prove to be useful over time:

Please note that this is just a shell price, shell. (Stent complimentary)

PLEASE CAN ANYBODY FIND A E MAIL ADRESS FROM LI

They sell a mchf Transiever completely build incl. mike.
You can order a single peache for around 350 USD plus shipping