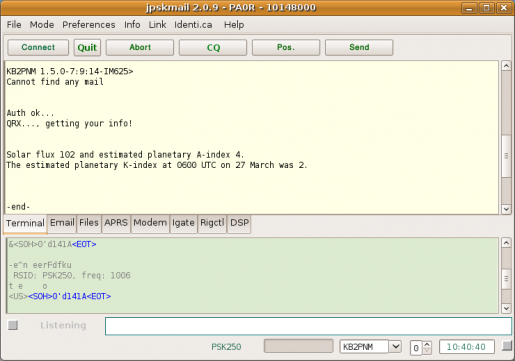 The history of the project

The PSKmail project was started by Rein Couperus, PA0R early 2005. The baby steps were taken with a modification of gMFSK, the mode of choice was PSK63 and traffic was handled by the one and only server (PI4TUE) that existed. Soon another server joined the effort, SM0RWO in Stockholm, and suddenly the project had “multiple” users (two) and had to evolve. For a time there was only the server in Stockholm and two clients (PA0R and SM0RWO) and the project made necessary adjustments for the hf environment. Soon more servers started to appear, IS0GRB/Roberto, added a much needed server in the Mediterranean. Then more and more servers joined, such as WB5CON/Fred and DL9YCS/J?rg. The Intermar group then followed with several servers. At the start only email traffic was handled and, as stated earlier, only done so using PSK63. Soon more services were added, web browsing was one of those. One of the more important additions was APRS.

Traffic was handled nicely by PSK63 but yours truly, SM0RWO, felt the need for speed and noticed that the Fldigi project offered PSK125. Quickly Fldigi was integrated and PSK125 was the mode of choice for a long time. That urge for faster modes resulted in a move to PSK250 which is an excellent mode, it is of course faster and thus wider (abt 250 Hz). Wait a second, we almost always use 500 Hz filters in our rigs. Why not aim for a 500 Hz wide mode then? That mode was PSK500 and we moved there around summer of 2009. Lengthy discussions within the group resulted in the consensus that it was time to break free from the chains of the old PSK31 keyboard to keyboard concept. PSK31 was indeed a fine idea but it had to make some sacrifices in order to reach its goal of being a suitable successor to rtty. Processing times could not be long, it had to deliver data pretty much in a similar way that the rtty operators were used to and one apparent problem was a lack of forward error control. A missing character here and there can mostly be handled by the human brain, not so by a computer with checksum control of received frames.

VK2ETA, John Douyere, made it his task to create the more robust modes where FEC and an interleaver net was added to the PSK modes, the new mode is designated as PSKRobust 500/250/125 and has been a real success. In fact PSK robust 500 has been the default EU mode ever since. Mode profiles were added by Rein, these control the server speed and mode that can be adapted by the server. The server can move a connected session to a faster mode when the conditions are right and can of course select a more robust mode when the conditions deteriorate. While writing this asymmetric linkup has been implemented. By that we refer to a connection that does not use the same mode and speed in both directions. For instance its now possible to have a weak client use a slow and robust mode while the server uses a very fast one. The mode scope now ranges from THOR4 to PSK500, using PSK, MFSK and THOR modes to cater for differing adverse conditions, including polar flutter, multipath, Doppler and QRN.

How much bandwidth does the mobile ham really need?
Like most questions, there are several answers to this. The best one probably being “it depends on your lifestyle”. If you are used to broadband internet access and don’t want to give that up when you are en route, you are a potential candidate for internet access via satellite, and you will have to bear the cost of that luxury. If on the other hand you are en route to relax, and you don’t need instant information, you could try PSKmail for bare bones information delivery. Pskmail gives you a 500 Hz wide channel to the internet. This is enough to get the most important email, the weather forecast and the daily update on the sunspots. Being nomadic, we live on a boat during summer and in a camper during winter, I get by with 200 Hz and a half hour session with the server most of the time. How much email do you really need daily to keep up to date?
Of course we combine daily PSKmail with a webmail session once a week, to get the ‘picture ‘ if you know what I mean. And to get the non-ham stuff.
But I can upload software patches to the internet on a daily basis while living on a Mediterranean beach which does not have a ADSL socket.

PSKmail is a narrow band arq system for use by amateur radio hams via short wave (HF) communication. It does not use a special controller, you just need a computer with a sound card.
The PSKmail server uses the fldigi program as a modem, and can use PSK, MFSK and THOR modes, including the new robust PSK modes which include soft viterbi decoding and interleave to increase immunity to qrm and qrn. The client is written in java, and has the modems built in. The operator can choose several modes and speeds when starting a connection, to match channel conditions.

The main characteristics of PSKmail can be summed up as:

? A semi duplex ARQ Chat client capable of transferring files
? A full fledged solution for HF APRS, including integration with the map clients
? An internet connection that can be used where there is no internet connection. Such as from a boat at sea or a cottage somewhere or on expedition or…
? Narrow, efficient, data modes are used. Thus enabling even the most modest setup.
? Servers on short wave provide long range connectivity
? No expensive and bulky modem, all you need is a PC, a transceiver and an antenna
? Available on multiple operating systems (Linux and Windows, MacOS and FreeBSD)