QRQ is an open source Morse telegraphy trainer which runs on several operating systems (Linux, Unix, OS X and Windows), similar to the classic DOS version of Rufz by DL4MM.

It’s not intended for learning telegraphy (check out LCWO or have a look at radio.linux.org.au for CW learning software), but to improve the ability to copy callsigns at high speeds, as needed for example for Contesting. 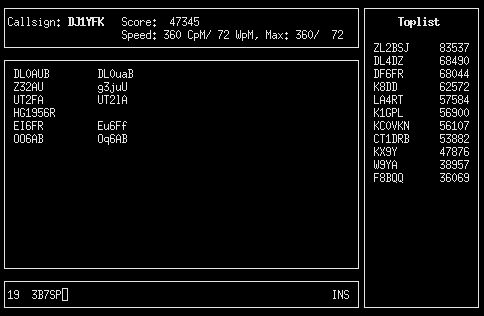 How to use it

Using qrq is simple: qrq sends 50 random calls from a database. After each call, it waits for the user to enter what he heard and compares the entered callsign with the one sent. If the callsign is copied correctly, the speed is increased by 10cpm / 2wpm and full points are credited, if there were mistakes in the callsign entered, the speed decreases by 10cpm / 2wpm and (depending on how many letters were correct) only a fraction of the maximum points are credited.

A callsign can be heard again once by pressing F6, hitting F10 aborts the attempt.

The possible speed ranges from 20cpm (4wpm) to infinity, the initial speed can be set by the user (in ~/qrq/qrqrc or in the settings menu, F5).

Additionally, there are several training modes available. Arbitrary databases of callsigns or words can be loaded, it’s possible to practice at a fixed speed, etc.