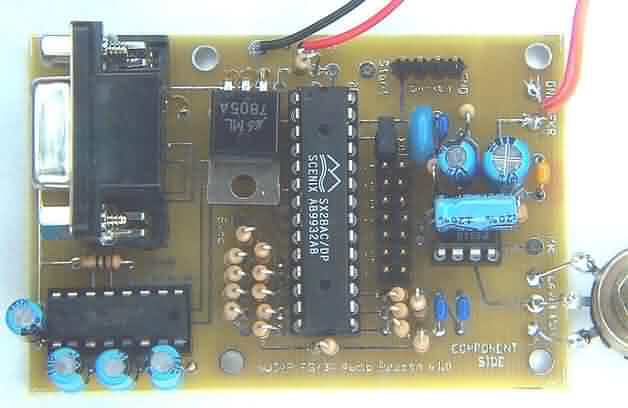 Here’s an easy, fun and intriguingly useful project that has evolved from an ongoing design effort to reduce the complexity of a PSK31 controller.

A conventional PC typically provides the relatively intensive computing power required for PSK31 modulation and demodulation.  With this Beacon project, however, the PSK31 modulation computations have been designed to fit into a small PIC-like microcontroller that can serve as the basis for the transmit half of a standalone PSK31 controller.

A fast and inexpensive  microcontroller has been programmed to generate an audio data stream using the PSK31 algorithms.  The data-driven audio waveform is fed to an amplifier IC that drives a speaker – and voila, the familiar and melodious PSK31 warble is able to be heard! When presented as input to a PSK31 receiving system such as DigiPan, these modulated audio tones are decoded and the programmed beacon string is displayed.

A keyboard or data terminal may also serve as the input of real-time textual data to the PSK31 Audio Beacon. A standard RS-232 serial interface is provided in the hardware and software to allow a more dynamic “signal generator” use of the project.

The project can be electrically connected to the input of an SSB transmitter to create an RF PSK31 beacon.

This project is also ideally suited for groups wishing to have some “audio beacon” fun during meetings. A number of club members would operate their audio beacons while someone attempts successful copy of the beacon strings while sitting at a laptop equipped with DigiPan software.

Construction is simple and straightforward and you’ll have immediate feedback on how your Beacon works when you plug in a 9V battery and speaker.

THE “BEACON” PART
The “beacon” part of the kit comes about in the kind of data programmed into the PIC.  Each kit’s microcontroller comes pre-programmed with a simple informational string containing (at a minimum) the individual’s callsign and a code word. (Use of a code words is typical for beacon transmitters).  For example, the data string currently programmed in my PSK31 Beacon is an endless loop of:

“SO, WHAT CAN ONE DO WITH AN AUDIO PSK31 BEACON?”
As mentioned, the Beacon may be used as the basis for a fun group “contest” activity for your club. All contestants would turn their beacons on and gather around a laptop running the DigiPan application.  Laptops generally have built-in microphones that would be used to decode the audio PSK31 tones “in the air” … and with over 100 beacons warbling simultaneously, there will certainly be audio tones in the air!

Recall that each Beacon’s microcontroller is customized with a callsign and is run on slightly different frequencies.  One Beacon may have its tones centered at 978 Hz, while another may have it’s tones at 1050 Hz.  This spreading out of Beacon signals will help when multiple beacons are placed in service at the same time within close geographic proximity.

Okay, so you’ve got the picture of a whole bunch of club members amassed around a table with an operator sitting at the laptop running DigiPan, right?  Within a specified period of time, the idea is to see how many of the Beacons can be copied (callsign & code word), as captured by DigiPan.  Factors involved in successful reception include the settings of the audio amp, the type of speaker, the distance between the Beacon and the laptop, adjacent QRM (other Beaconers), etc. “Points” are awarded to all Beacons for the degree of solid copy captured to the DigiPan log during that 15 minute period.  (You can see a photo of this excitement in June QST’s “QRP Power” column on page ___, as snapped by Rich Arland K7SZ at the Atlanticon QRP Forum held this past springtime.)

This all may may sound complex, but it’s really quite simple — build the Beacon, turn it on and see how well it can be copied by DigiPan.  Each contestant could actually do this during the test phase at home prior to the club event.

USING THE BEACON
Sure, projects can be fun for a weekend’s contest or fun activity, but the PSK31 Audio Beacon can have lasting value for the PSK31 enthusiast.  The audio tones generated by the Beacon can be presented as input to any SSB transmitter — a Warbler, PSK-20, PSK-40, or even a Yaesu FT-1000MP.  Thus, a PSKer can easily put a beacon signal on the air for all the same reasons that CW beacons are used (e.g., propagation studies, etc.)

Recall that each Beacon’s microcontroller is customized with one’s callsign and is run on slightly different frequencies.  One Beacon may have its tones centered at 978 Hz, while another may have it’s tones at 1050 Hz.  This spreading out of Beacon signals will help when multiple beacons are placed in service at the same time within close geographic proximity.

PRICE
This kit is no longer available.

K9AY loops HF Antenna Kit by RemoteQTH.com
The K9AY is terminated loop. It consists of a wire loop of any convenient shape (diamond, delta, etc), hung from a single support and with a ground rod at the bottom. A 9:1 impedance-matching transformer...

W3YY FSK/CW Optically Isolated PC Interface
This page describes an FSK/CW PC interface that will allow a PC to key your transmitter producing either a pure FSK or CW signal. The interface is fully optically isolated and RF filtered. Interface...