The sun is waking up from a deep slumber 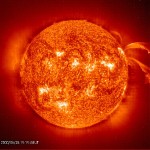 Earth and space are about to come into contact in a way that’s new to human history. To make preparations, authorities in Washington DC are holding a meeting: The Space Weather Enterprise Forum at the National Press Club on June 8th. Many technologies of the 21st century are vulnerable to solar storms.

Richard Fisher, head of NASA’s Heliophysics Division, explains what it’s all about:

“The sun is waking up from a deep slumber, and in the next few years we expect to see much higher levels of solar activity. At the same time, our technological society has developed an unprecedented sensitivity to solar storms. The intersection of these two issues is what we’re getting together to discuss.”

The National Academy of Sciences framed the problem two years ago in a landmark report entitled “Severe Space Weather Events—Societal and Economic Impacts.” It noted how people of the 21st-century rely on high-tech systems for the basics of daily life. Smart power grids, GPS navigation, air travel, financial services and emergency radio communications can all be knocked out by intense solar activity. A century-class solar storm, the Academy warned, could cause twenty times more economic damage than Hurricane Katrina.

Much of the damage can be mitigated if managers know a storm is coming. Putting satellites in ‘safe mode’ and disconnecting transformers can protect these assets from damaging electrical surges. Preventative action, however, requires accurate forecasting—a job that has been assigned to NOAA.

Bogdan sees the collaboration between NASA and NOAA as key. “NASA’s fleet of heliophysics research spacecraft provides us with up-to-the-minute information about what’s happening on the sun. They are an important complement to our own GOES and POES satellites, which focus more on the near-Earth environment.”

Click on the image to play a 39 MB movie about space weather and NASA’s heliophysics fleet. [more]

Among dozens of NASA spacecraft, he notes three of special significance: STEREO, SDO and ACE.

STEREO (Solar Terrestrial Relations Observatory) is a pair of spacecraft stationed on opposite sides of the sun with a combined view of 90% of the stellar surface. In the past, active sunspots could hide out on the sun’s farside, invisible from Earth, and then suddenly emerge over the limb spitting flares and CMEs. STEREO makes such surprise attacks impossible.

SDO (the Solar Dynamics Observatory) is the newest addition to NASA’s fleet. Just launched in February, it is able to photograph solar active regions with unprecedented spectral, temporal and spatial resolution. Researchers can now study eruptions in exquisite detail, raising hopes that they will learn how flares work and how to predict them. SDO also monitors the sun’s extreme UV output, which controls the response of Earth’s atmosphere to solar variability.

On April 19, 2010, SDO observed one of the most massive eruptions in years.

Bogdan’s favorite NASA satellite, however, is an old one: the Advanced Composition Explorer (ACE) launched in 1997. “Where would we be without it?” he wonders. ACE is a solar wind monitor. It sits upstream between the sun and Earth, detecting solar wind gusts, billion-ton CMEs, and radiation storms as much as 30 minutes before they hit our planet.

“ACE is our best early warning system,” says Bogdan. “It allows us to notify utility and satellite operators when a storm is about to hit.”

NASA spacecraft were not originally intended for operational forecasting—”but it turns out that our data have practical economic and civil uses,” notes Fisher. “This is a good example of space science supporting modern society.”

2010 marks the 4th year in a row that policymakers, researchers, legislators and reporters have gathered in Washington DC to share ideas about space weather. This year, forum organizers plan to sharpen the focus on critical infrastructure protection. The ultimate goal is to improve the nation’s ability to prepare, mitigate, and respond to potentially devastating space weather events.

“I believe we’re on the threshold of a new era in which space weather can be as influential in our daily lives as ordinary terrestrial weather.” Fisher concludes. “We take this very seriously indeed.”