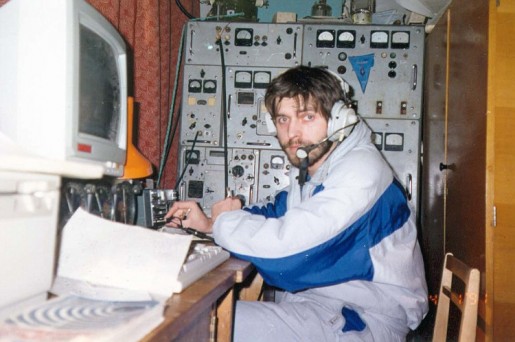 As of today, Roman (3W3RR) is held in the western building of the
detention center MDC Brooklyn in Brooklyn, New York. Prior to 2007, he
was in a number of prisons from Cyprus to California and Oklahoma. U.S.
authorities have been keeping him without sentencing for 10 (ten) years
from the date of the arrest in Cyprus (in February 2003), periodically
assigning new accusations that are regularly supplied by Secret Service
and the Justice Department in Washington.
Since last year, Roma dismissed all his lawyers and now is defending
himself, as obviously none of them – neither paid by the government nor
private – could help. In the meantime, he is getting as much pleasure as
possible from this rather prolonged DX-jail adventure.

Letters, photographs, and QSL can be sent to the address of the prison:

I’ve gotten a letter from Roman (“Romeo”) Stepanenko, aka Roman Vega, the one we know as 3W3RR (ex AH0M). He is an unwilling guest of the the US Government, currently at MDC (Metropolitan Detention Center), in Brooklyn, NY.

It has been 7 (seven) years that he has been in this country, since he was extradited from Cyprus, accused of credit card fraud by our Dept of Justice. Somewhere on the internet there is a cheerful press release about that event, going back to 2003.

Well, it is seven years later – and there has been no trial. Detention – yes, continued investigation – certainly, but NO TRIAL. Call me naive, but I would have difficulty believing this is possible in this country. Well, it is possible. Seven years is a long time to investigate a case against someone held in jail. IMHO, something is
wrong with this picture. Or maybe the case isn’t that solid? Draw your own conclusions, fellas.

He is residing only few miles away, yet we had no contact over this time. This is the first letter I received. I dare to guess that something is changing in his circumstances and he decided to write

He doesn’t speak about his case much. It is an intensely private matter. Apparently he doesn’t want to share it with the worlds at this time. The reasons are obvious

Do you want to know if he is alive and well? He is, full of the usual “piss and vinegar”. He is doing as well as he can within the jail confines. Romeo shares his cell with other inmates, all 120 of them. Call it a room with a view – allowing for a peek at distant Manhattan and Gowanus Expressway 40 ft away.

His English has improved to the point of becoming his ‘official’ second language. He has spent last 3 years studying Japanese and other languages. Romeo is busy – his own library of about 150 books and a stack of books and periodicals waiting to be read (he is subscribed to about 20), extensive letter writing to all sorts of people, excelling at yoga. His mood is upbeat and he keeps a very positive outlook on life and his own fate. This is the same unbending Romeo I knew back when he was in zenith of his worldwide fame, except showing more wisdom and reserve.

Do I think he is an angel with a snow-white consciousness? No, not really. Does he deserve our sympathy? That depends on which side of the fence you are on. I think that Amateur Radio world may have lost track of Romeo for awhile, but he is not forgotten. So, boys and girls, fan (and hate) mail may be sent to him directly: Roman Vega, # 59198-004, MDC, PO Box 329002, Brooklyn, NY 11232, USA. Letters, photos and QSLs are welcome – but currency, checks or IRCs of any kind are strictly forbidden by jail regulations – DO NOT SEND them. (Romeo, ain’t this ironic?)

He promises a special jailhouse QSL when he gets out (another ‘new one’ from this DXpeditioner). Just don’t expect one too soon ))

To those inquiring minds who want to know: Is Romeo Stepanenko using me to get his name back in the limelight again? The answer is no. OK, maybe just a little bit. But I don’t mind. He hasn’t asked for
anything. I’m posting this letter to the Amateur community totally on my own. Opinions expressed are my own and not Romeo’s.