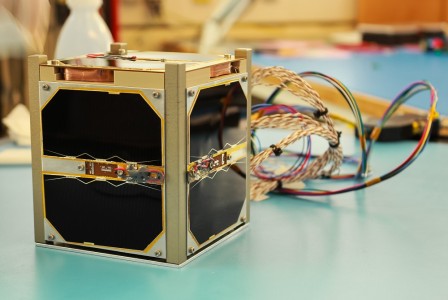 A package of two satellites carrying Amateur Radio payloads has been deployed into orbit from the International Space Station (ISS) as part of a collaborative Texas A&M and University of Texas at Austin research effort. Built by Texas A&M students, AggieSat4 (AGS4) will release UT’s Bevo-2 CubeSat in about a month, once it is far enough away from the ISS. Both schools received support from NASA’s Johnson Spaceflight Center (JSC) for the design, construction, testing, and launch phases. The goal of the overarching LONESTAR (Low Earth Orbiting Navigation Experiment for Spacecraft Testing Autonomous Rendezvous and Docking) program is for the two satellites to individually rendezvous with each other and perform docking and undocking maneuvers.

“The overall objective is to find ways for small spacecraft to join together autonomously in space,” Helen Reed, KD7GPX, professor of aerospace engineering and director of the AggieSat Lab at Texas A&M told NASA. “We need simple systems that will allow rendezvous and docking with little to no help from a human, which will become especially important as we venture farther out into space. Applications could include in-space assembly or reconfiguration of larger structures or systems as well as servicing and repair.”

The AggieSat team received its first beacon signal from the satellite at its Texas A&M Riverside Campus ground station. The AggieSat4 team is asking any Amateur Radio operators receiving the beacon signal to send any data to the AGS4 team. AggieSat4 will transmit 9.6 kbps FSK telemetry and 153.6 kbps FSK on 436.250 MHz. Once it’s placed into its own orbit, Bevo-2 will transmit on 437.325 on CW and 38.4 kbps FSK.

Both satellites were launched to the space station during a December 6, 2015, resupply mission. Earlier last week, Astronauts Tim Peake, KG5BVI, and Scott Kelly made preparations to deploy the sizeable LONESTAR phase 2 mission satellite package from the ISS, using the SSIKLOPS deployer. The satellite mission also will demonstrate communication cross links, data exchange, GPS-based navigation, and other tasks. AggieSat4 will capture images of the Bevo-2 release.

The satellites were independently developed by student teams at the two universities. Both teams were responsible for development plans for their satellite and had to meet established mission objectives.

The Bevo-2 Satellite was designed, built, and tested in the Texas Spacecraft Lab (TSL) at the University of Texas at Austin. “This whole experience is very exciting,” TSL Director Glenn Lightsey, KE5DDG, said last fall as undergraduate and graduate students were in the final stages of their project. “It’s great to have a research program where our students can build satellites that fly in space.” Reed and Lightsey are co-investigators for the LONESTAR 2 project.