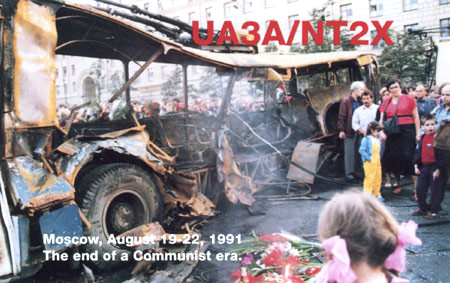 There is a very interesting article entitled “Soviet Hams Rally Against Coup” by Edward Kritsky {NT2X} (P.O.Box 715, Brooklyn, NY 11230 USA) in the November 1991 issue of QST. (QST is the official monthly journal of the American Radio Relay League, 225 Main Street, Newington, CT 06111 USA.). That issue also contains sidebars on “Meanwhile, in St. Petersburg” by Robert S. Howe {K1MZB} and “The ‘White House’ Operation” by Anton Rebezov {UA6YHP} and Dima Guskov {UV3DCX}, from which the following are exerpted.

“On Monday, August 19, Andy Gromov, UA6XGL/3 … agreed to begin transmitting the decrees from his home station, and did so until his transceiver failed. Then an invitation came… to set up on the sixth floor of the White House.”

“I installed my homemade transceiver and a 300-watt amplifier using a power cord cut from a vacuum cleaner for interconnecting cables. For cooling, we set my amplifier on a garbage pail with a fan.”

“R3A came on the air at 2 AM Moscow time August 20… and began transmitting the first of many decrees from Russian President Boris Yeltsin.”
“The military soon began jamming us….”

“By Tuesday, August 20, some amateurs in Moscow had discovered the frequencies being used by the putschists. They began reporting… tank movements around the city to the White House.”

“Jamming of R3A reminded us of the infamous Russian ‘Woodpecker’ (frequency-sweeping, over-the-horizon radar). To avoid this, R3A moved frequency, confusing the nonamateur jammer operators with ham jargon such as Q signals, ‘Up five,’ and so on.”

“On the morning of August 20, two representatives of Moscow-Boston International arrived: Yuri Brazhenko and Romeo Stepanenko. They brought an IC-726 to replace my homemade transceiver.”

“R3A was received all over the USSR, where amateurs taped our broadcasts for delivery to local government officials and for the newspapers. Foreign embassies and the US Department of State also began tuning to R3A.”

“Also on the 20th, station R3B was set up on the 20th floor of the Whit House. There … one of the popular homemade amateur … transceivers [was modified] to transmit AM on the broadcast band. … This enabled citizens throughout Moscow proper to receive Yeltsin’s decrees on their table radios.” 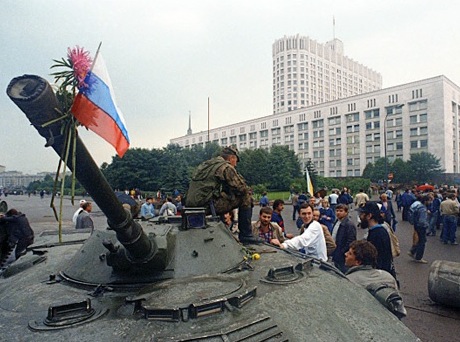 The attempted coup in the Soviet Union was reflected on radio and television. (19 August 1991)
RUSSIAN PARLIAMENT/RUSSIA’S RADIO
During the coup, media was tightly controlled and the Russian Federation’s Russia’s Radio was off the air. The Russian parliament was relayed on amateur radio. Here at Radio Sweden we monitored it in single side band on 14165 kHz. The relays on amateur radio used the call sign R3A, and were also reported on frequencies around 7040 and 13640 kHz.

Radio “ECHO OF MOSCOW”
Echo of Moscow is an independent radio station in Moscow that was closed on the first day of the coup. The station went on the air on August 22nd 1990, and was founded by the Moscow City Council, the Journalism school at Moscow University, along with an independent radio association and a local magazine. They have a 10 kW medium wave transmitter on 1206 kHz, and had planned to begin FM broadcasts later this year. Echo of Moscow has issued a plea for equipment, especially portable cassette recorders, reel to reel tape editing machines, and a studio to transmitter radio link to free them from dependence on leased phone lines.