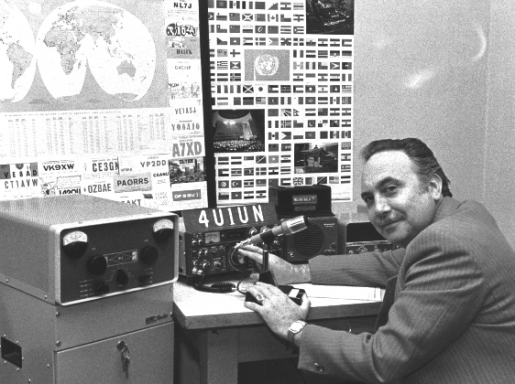 Max de Henseler, HB9RS, the founder and president emeritus of 4U1UN at United Nations headquarters in New York, died December 30. He was 80. A ham since 1955, de Henseler had been a short-wave listener since the late 1940s. In 1976, while in New York as the UN’s chief cartographer, de Henseler reactivated the United Nations Radio Club station K2UN at its new home in midtown Manhattan. As Jack Troster, W6ISQ, explained in the July 1989 issue of QST, “Through his efforts, the Secretary General approved the operation of a specifically designated UN amateur station using the call 4U1UN in early 1978.”

De Henseler introduced the new call sign on February 4, 1978, during the first weekend of the then two-weekend ARRL International DX phone contest, surprising many contesters. 4U1UN was approved for DXCC credit, due to the efforts of “Mister UN Radio.”

During his UN career, de Henseler, an international Amateur Radio figure, traveled around the globe, operating from various call signs, including ET3RS, XW8HB, 5W1BK, 9Y4RS, EL2DX, HP1HN, 3D2RS, FO0RSM, and DJ0AB. His QRZ.com web page cites de Henseler’s “50 years of leadership and contributions to the promotion of international Amateur Radio and the preservation of radio history.” He was the first amateur to have communicated with all continents from all continents.

De Henseler was a member of the USKA — Switzerland’s IARU member-society — and a fellow of the Radio Club of America. A radio historian, he was a member of the HB4FR “Clin d’Ailes” Swiss Air Force Museum Ham Radio Club, where he established a Hallicrafters collection, and he authored numerous articles in various technical and historical radio journals, including “The Hallicrafters Story — When the Sky was the Limit,” and “On Marconi’s Trail in Switzerland.” He also belonged to the Antique Wireless Association, the Quarter Century Wireless Association (he founded the QCWA’s Helvetia Chapter 209), the Society of Wireless Pioneers, and A-1 Operator’s Club.

The 4U1UN United Nations Headquarters Station was dismantled in 2010 due to the extensive renovation project on the Secretariat Building. Security concerns and logistics stand in the way of its returning to the air anytime soon. All antennas have been removed from the roof, and equipment has been packed away. The club is reported to be considering several options to get 4U1UN back on the air as quickly as possible. Some options include controlling the station remotely, putting the station on the ground floor (and running some 400 to 500 feet of feed line to the top of the building), or moving the station to another sovereign UN building. — Thanks to The Daily DX